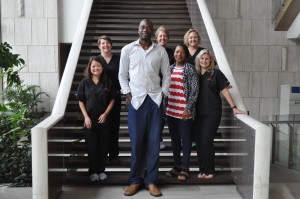 Dikembe Mutombo and his wife Rose pose with the WOGO Pre-Trip team in Kinshasa, Democratic Republic of Congo

Mt Airy, NC January 27, 2016 – Women Orthopaedist Global Outreach (www.WOGO.org) announced the location of their next medical mission in June 2015. The team will be traveling with the Dikembe Mutombo Foundation (www.DMF.org) to the Biamba Marie Mutombo Hospital in Kinshasa, Democratic Republic of the Congo. The medical mission has been scheduled on the calendar in July 2016. It will be the team’s fourth medical mission.

In a July press release Dr. Robyn Hakanson, WOGO surgeon and founding member stated, “The WOGO team is thrilled with our new partnership with the Dikembe Mutombo Foundation and with our relationship with Mr. Mutombo.  We believe that together our groups can bring mobility back to many individuals in the Congo who are in need of reconstructive knee surgeries. Our missions’ are the same, improving people’s health, providing educational opportunities and reaching out to local communities to improve lives. We believe this will be a wonderful relationship.”

WOGO sent a group of surgeons and logistics leaders with DMF’s recent delegation, which traveled to the DRC in July 2015. There the team met with hospital officials to plan the 2016 medical mission.

Dikembe Mutombo is the chairman and president of the Dikembe Mutombo Foundation, which he established in 1997 to improve the health, education and quality of life for the people in his homeland, the Democratic Republic of Congo.

A graduate of Georgetown University, with dual degrees in linguistics and diplomacy, Mutombo played professional basketball for 18 years before retiring from the Houston Rockets in 2009. Over the course of his basketball career, he played for six teams and earned a reputation as one of the best shot-blockers in league history. He was inducted into the NBA Hall of Fame, Class of 2015. In 2007 the Dikembe Mutombo Foundation opened the Biamba Marie Mutombo Hospital—a 170-bed, $29 million hospital located in Kinshasa, Democratic Republic of Congo—in memory of his mother. Closer to home, Mutombo devotes much of his time to charitable causes, which include Hughes Spalding Children’s Hospital Christmas toy drive, Hosea Feed the Hungry, the Atlanta Community Food Bank and making personal appearances at local schools to encourage academic excellence and motivate students to think globally.

For the past 12 years, Mutombo has been one of the leaders of Basketball Without Borders/Africa, the NBA and the International Basketball Federation’s (FIBA) global basketball development and community outreach program that unites young African basketball players from across the continent to promote the sport and encourage positive social change in the areas of education, health and wellness. In addition to his role with the CDC Foundation, Mutombo serves on the boards of the National Constitution Center, Opportunity International, Special Olympics International and on the National Board for U.S. Fund for UNICEF. In 2009, NBA Commissioner David Stern appointed Mutombo to the newly-created position of Global Ambassador.

The first appointed Youth Emissary for the United Nations Development Program, Mutombo previously served as a spokesperson for CARE and on the Advisory Board for the Fogarty International Center at the National Institutes of Health. He also served as an advisor and consultant to Freeport-McMoRan and as an advisor to Hewlett-Packard. Mutombo has been named ABC’s Person of the Week, Essence Magazine’s 2001 Achiever, and Sporting News’ No. 1 Good Guy. He has also been featured in many media outlets for his humanitarian efforts, including Europe’s TIME magazine, Sports Illustrated for Kids, The New York Times, The Philadelphia Inquirer and the Houston Chronicle.

Women Orthopaedist Global Outreach (WOGO) is a not-for-profit volunteer medical service organization led by female orthopaedic surgeons. They have seen first-hand the power of joint replacement surgery to transform the lives of those who suffer from arthritis, the most disabling chronic disease in the world.

WOGO is incorporated as a team of Operation Walk (www.operationwalk.org), a 20-year non-profit volunteer medical service organization that provides free surgical treatment in developing countries (and occasionally the United States) for patients that have no access to life-improving care for arthritis or other debilitating bone and joint conditions. Twelve other Operation Walk teams have successfully completed missions in nine different countries. The team has joined their global campaign because, although joint replacement surgeries have been performed on thousands of patients, millions more are needed.