Thinking about our trip to the Congo brings up all kinds of memories.

Traffic. Massive traffic. People walking in the road and just crossing the street wherever they feel like it.  And these are main 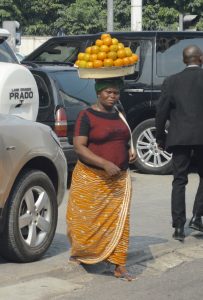 roads, 4 lanes full of traffic. Cars and trucks finding a break in the traffic floor it and take off. One night we had a truck coming straight at us, in traffic. We sat in our bus looking at the people in the truck who were looking back at us. There was nowhere to turn as the vehicles were surrounded on all sides by cars, trucks, buses, vans and people streaming in between it all. No real horn honking going on though, just noise and chaos that appears to be normalcy. Traffic was the same in the morning and evening, but midday? Nothing, not a car in the road. 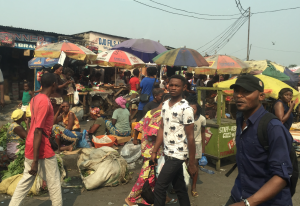 Food. We ate lots of the local foods, including caterpillar. Caterpillar is dehydrated caterpillar, that is then sautéed in butter or oil and garlic and spices.  It’s tasty, and chewy. We had fish at nearly every meal, usually Capitaine a boney white fish that is really tasty.  It’s cooked in many different ways, but my favorite is Liboke which is cooked inside of banana leaves.  We ate lots of chicken, and antelope and goat. The bread is really tasty as well. We had sweet potatoes and yams and plantains. We tried fufu, a cassava starchy flour ball. There was a super-hot sauce that we all tried to eat on its own with our foods, until we saw our Congolese co-workers mixing it with mayonnaise and ketchup. Hey, you learn something new every day.

Color. There was color everywhere we looked.  From the varieties of the street light robots who take on the appearance of Transformers, to the painted buildings and bright vans there is color everywhere.  But the brightest of all is the colors of the fabrics you see all around you.  The women wear beautiful fabric 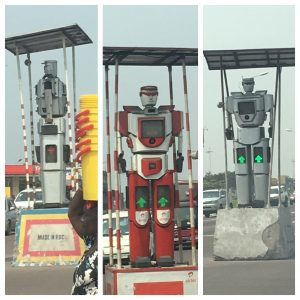 dresses and headscarves.  The men wear gorgeous shirts.  Its glorious.  The parade of colors and fashion is all around you all the time. So much to see and catch your eye.

Exhaustion. Long days of work. Breaking through one barrier after another. Being in traffic so much meant even longer days.  The autoclave failing meant longer days. Wanting to fulfill the promise we had made pushed the entire team to longer days. No one complained. No one would have done it any differently. To combat the exhaustion there were cat naps and the break room became a snooze fest of sorts. 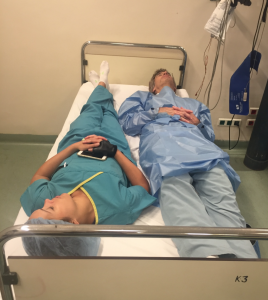 Toilet paper rolls became pillows and team members turned twin beds into doubles. Anything to catch a wink of sleep. But it was worth it. And what a memory!

Kindness. The Congolese are some of the kindest people I have known. Everyone we encountered was eager to get to know us and shake our hand or hug us and greet us with three kisses. Every 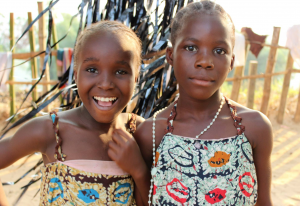 mission has those special people who we carry with us forever after we leave their hospital.  Congo was different. We gained team-members. The team at the hospital worked with us, sweat with us and stayed late with us every single day, even when they could have gone home.  They were a part of our team. Our drivers and security guards did the same, worrying over our safety. Checking on WOGO team members who had been ill. The good-byes were some of the most emotional one’s we’ve had.

The memory that truly tells the story of this mission for me occurred during our shoe distribution day. Our distribution 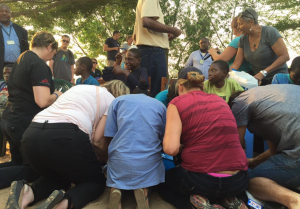 location was an orphanage which is home to more than 500 children, infant to 19. Understandably they wanted to keep control of how we would give our items to the kids. DMF had brought a large quantity of food, we had our tremendous donation of shoes from Soles4Souls, and all of the team members had brought coloring books, crayons, notebooks, and WOGO provided soccer jerseys and goals too.  There was a lot.  And the leaders at the orphanage were skeptical we could size and shoe a multitude of children. Well, boy did we! And the best part, everyone participated.  The WOGO team, the Mutombo family, the DMF team, the hospital staff and our drivers and security guards all participated. They selected shoe sizes, put shoes on children’s feet, played with children, blew up beach balls and jumped into the fray. It was glorious, it was colorful and it was amazing.

I keep revisiting all of the memories of the trip. I know that our whole team is.  The Congo spoke to us, and we are going to share the stories with everyone we know.